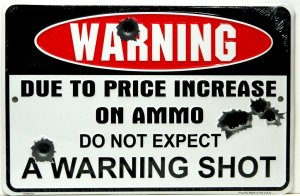 During the severe ammo and reloading component shortage during 2013 and 2014, many folks have been forced to find alternatives to their normal suppliers. As a high-volume reloader this shortage hit me particularly hard. At first I was feeling pretty good because I had several thousand rounds “in the bank” and knew I could shoot the entire 2013 summer with the ammo I had on-hand. Little did I know that this would drag on for over a year. My beloved Montana Gold Bullets became almost impossible to find in stock and I was forced to consider other alternatives. END_OF_DOCUMENT_TOKEN_TO_BE_REPLACED

They say there are two kinds of reloaders: those that have gotten a case stuck in a resizing die and those that will. I don’t know about that (Kevin apparently never has) but I do know that I recently got one stuck while reloading .223 rounds. END_OF_DOCUMENT_TOKEN_TO_BE_REPLACED

A friend recently mentioned that he had tried out some “sub-sonic 9mm ammo” that was supposed to be good for use in USPSA Production class shooting. He asked me what I thought, which resulted in the following response.

Before I comment on subsonic ammo, a few words are in order:

As a competitive shooter, one of the key reasons for reloading is to work up a tuned round specifically to work with one’s tuned pistol to produce shots with little felt recoil that still achieve minimum power factor for the division one is shooting. In our case (Production division) everyone is scored Minor Power Factor (MinorPF), so there’s no advantage to loading higher than that. Minimum MinorPF is 125. This is Mass (bullet weight in grains) times velocity divided by 1000. So, if you are shooting 115gr bullets at 1100 feet-per-second that equals a PF of 126.5, or just over the minimum for Minor. Most factory ammo is hotter than this, which results in a higher PF but also much greater felt recoil. Shooters desiring less recoil and more control can achieve this by trading velocity for bullet weight. END_OF_DOCUMENT_TOKEN_TO_BE_REPLACED

Russian ammunition has long been available in the US to anyone shooting the classic 7.62x39R AK/SKS caliber. While much if not most of it may look the same, there are significant differences. The vast majority of this ammunition is produced in one of two plants in Russia: Bear in Bernaul and Wolf in Tula. These are enormous plants that are emblematic of the Soviet military/industrial expansion during the Cold War.

While all ammo produced by Bear/Wolf has been steel cased, early production included a lacquer coating to protect against rust. This is all but gone now (a few pallets may remain in the back of a warehouse here or there) with the new cases sporting a polymer coating instead. This greatly reduces the problems with melted lacquer fouling the chamber. Of course, this problem really was only significant with .223/5.56 cartridges and not with the AK round.

What really sets the Wolf Military Classic JHP apart from the rest for me is the waterproof sealant around the bullet and the primer, the tighter quality control (currently at least) and the hollow point terminal ballistics. Interestingly enough, when considering full metal jacket ammunition, the terminal ballistics for .223/5.56 is more impressive than that of the 7.62x39R round. This is assuming relatively short-range engagements. This is because the AK round tends to over-penetrate (through-and-through) whereas the AR round penetrates a short distance, yaws then disintegrates causing massive wounding. In the case of the 124gr

JHP round under consideration, this counter-intuitive condition does not exist. Nothing short of a .308 can outperform the devastating terminal ballistics of this round.

So, why don’t I buy some Winchester White Box then reload this round instead of only shooting factory ammo? Mainly it is an issue of cost. For me, the AK-47 fills the role of low-cost, high-powered, dependable defensive rifle, chambered in the second most common caliber in the Western world. Having a highly-tuned round would be a waste frankly. When was the last time you heard the phrase “7.62×39 Match ammo”? Given that the rifle was designed from the ground up to shoot steel cases (unlike most Western rifles) there’s no worry about broken extractors or ejectors due to the introduction of the steel case. So low-cost Russian ammo is perfect for this application.

There are many great online sources for this round. I normally purchase 1,000-round cases so that I can keep plenty of mags loaded with fresh rounds and still keep proficient

with the weapon by shooting it on a regular basis. I probably shoot the gun 60-80 rounds a month, sometimes more in the warmer months. Again, this is just to keep familiar and make sure the gun doesn’t get rusty or full of lint or cobwebs.

So, what about practice rounds? Well, given the low cost of this round, it makes sense to simply use the same round in practice that I would for defensive purposes. It makes it simple to buy, shoot, store and plan for my AK ammo.

I have a lot of fun shooting firearms but let’s face it, we really do this for a much more important reason than simple pleasure. While it is true that many people hunt with guns, most hunting is done with long guns so time spent shooting pistols has a more profound purpose: self-defense. The handgun is the great equalizer, allowing almost anyone the ability to wield deadly force. This makes it much tougher for an assailant to justify risking their own safety by jeopardizing that of a would-be victim. So, if all this is true then the only remaining question is: how effective will I be when it really counts?

My skills as a shooter ultimately serve to give me every possible advantage in a lethal force scenario. I simply will not give an advantage to an adversary If I can avoid it. Life is precious and I’ll be damned if I will let someone take it away from me, my loved ones or any innocent person. In order to be most effective it takes a reliable, accurate weapon, skills, preparation and perhaps most overlooked of all: the best ammunition available.

I don’t believe in the Tooth Fairy, the Easter Bunny, Santa Claus (well, mostly I don’t) or any magic bullet that through mystical properties is perfectly effective against any and all adversaries. I believe, as do most experts in the field, that Marshal and Sanow’s famed study was deeply flawed and that the holy grail of firearms science, “stopping power”, is at best an incredibly complex phenomenon. Stopping Power, Knock-Down Power and One-Shot Stop Effectiveness are all really constructs of fertile imaginations and perhaps over-zealous gun writers. They are really just efforts to reduce data almost to the point of no meaning.

Does this mean that the famed .357 magnum is no better than a .380acp? Not at all. What it means is that whenever we discuss terminal ballistics we have to keep in mind that this is only a fraction of what goes into making ammunition truly effective. Above all else, shot placement is absolutely the most critical factor of effectiveness.

So, with all that said, the specific ammunition chosen for defensive/carry purposes is more important than most people think. Winchester White Box 115gr. FMJ rounds are great for practice but when life is at stake I want the very best I can buy. You will notice I said “buy” and not “load”. I make match ammo myself, which is very reliable and carefully constructed, but when life is on the line, I want rounds that are made in large batches with intense quality control before, during and after the process. I want those rounds to be made from the highest quality materials with the best properties for the application. And arguably nobody does that better than Hornady.

After looking over the usual suspects for defensive rounds, I recently selected Hornady’s Critical Defense line of ammunition for my personal carry rounds. They are Jacketed Hollow-Point bullets (Hornady’s patented FTX model) in nickel cases with fast-burning, low flash powders. This powder selection permits full velocity to be achieved even in short-barreled pistols while minimizing muzzle flash and thereby visibility. They also have a rubber plug in the slug cavity to keep lint, etc., out of the nose of the bullet. This material is designed to keep stuff out but to completely disintegrate upon impact, leaving the bullet to do its job. The nickel case is designed to reduce tarnishing and allow easy chamber checks even in low light.

As with any defensive rounds, you should always fire enough of them through your gun to insure they will function properly. I put about 100 through each gun and they were

flawless. The cost is inline with other defensive rounds and for me is a bargain at twice the price.

I like this round, especially for smaller concealed carry pistols and with Hornady’s commitment to excellence I would bet my life on it.