Eugene Stoner would be amazed at how popular his creation has become over the last 50 years. As “America’s Gun” there are many sources for information and parts. It doesn’t require a lot of tools or even mechanical aptitude so when Brian told me about his plan to build a carbine in early 2012 I figured it was a good time for me to build my first AR-15 as well. I had been thinking about a precision rifle for a while so that would be my project. 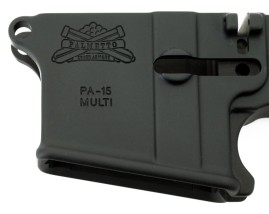 We got our lowers from Palmetto State Armory during one of their sales and I eagerly awaited the arrival of mine. I had done a lot of work on AR-15s but I had never assembled a lower receiver. I already had an old stock trigger, an A2 buttstock, tube, buffer and spring, and a USGI pistol grip. Lower receivers aren’t terribly difficult to assemble so off to the Internet! Our friends over at AR15.com have some outstanding guides on exactly how to do every part of the process. I bought a DPMS lower parts kit (LPK) without the trigger or grip and got to work. After reading through the instructions carefully I began to slowly assemble all the parts/pieces.

The PSA lower was supposed to be a “blemished” or “second” unit but I could not find a flaw anywhere. It has been suggested that when they have these blem sales they perhaps oversell and have to ship regular units to cover the sales. Maybe but since finishing this rifle I have built another and the PSA lower for that project was also perfect. Who knows?

The DPMS parts were fine and everything went together without a hitch. Many of the parts I had on hand were from Bushmaster and the trigger was a stock Oly but despite the different OEM sources, everything fit like it should. I test fired with another spec upper and it ran flawlessly. The trigger was slicked up as best I could but even so, I knew I needed something special for this project. But first, I needed an upper receiver…

Next up in Part II: RGuns Upper!

This site uses Akismet to reduce spam. Learn how your comment data is processed.